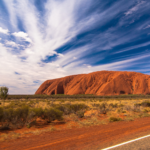 Australia is undoubtedly a massive country with about the same landmass as the United States. With a population of around 25 million people and 85% living within 50km of the coast, a large portion of the country remains uninhabited, primarily in the centre region. Although the number of people may be sparse in Central Australia, it is still home to numerous attractions and animals, and has a cultural history that draws in tourists from all around the globe. Here are 10 interesting facts about Central Australia.

It has an extreme climate

Throughout most of the year, the outback has a reputation for being scorching hot and boasts temperatures of over 40 degrees! Some people might not realise that winter can be quite extreme with temperatures dropping below -10.

There’s only one major town within the Northern Territory

Alice Springs is somewhat of an oasis for restaurants, cafes and other modern amenities in an otherwise sea of red sand and rock. Located in the centre of the continent, Alice Springs is the only major town in an area roughly 700,000 km2

Uluru is taller than the Eiffel tower

Uluru, also known as Ayers Rock is the second largest Monolith in the world at 348 metres! The rock stands taller than the Statue of Liberty, the Great Pyramid, and The Eiffel Tower.  It is sacred to the Anangu Aboriginal inhabitants of the area and is full of culture, art and history.

Imagine the sun setting over the desert and the landscapes changing colours. Uluru and Ubirr are the top places to experience the magic.

Surprising to most people who visit Central Australia, the camel is the most seen animal. Camels are not native to Australia and were brought here from the Canary Islands in the 1840s. With over 1 million now roaming Australia, it is the largest number of purebred Camels in the world.

There are over 150 Indigenous languages spoken

“About 61% of Aboriginal or Torres Strait Islander people in the NT speak their language at home. There are more than 20 ‘healthy’ languages being spoken in the NT, meaning they are being learnt by children.” – Common Ground

There’s a place where you can sleep underground

Coober Pedy is not only famous for opals but also for its underground hotels. If you visit, stay at least one night underground – there are plenty of options from camping to hotels.

Thorny devils are native to the outback and curiously cannot drink water with their mouths. Their entire mouth has evolved specifically to feed on small ants that share their habitat. Channels between the animals’ scales draw moisture towards their mouths, where they squeeze it inside in small gulps. This means the thorny devil can drink water just by standing in a puddle!

It does actually rain here!

Most people think that the Outback is a dry desert but it receives a surprising amount of rain, from 150mm in the arid areas to 500mm in semi-tropical parts.

The famous dingo fence runs through the Outback

The dingo fence built in 1885 stretches from South Australia through New South Wales to Queensland. The fence is one of the longest structures in the world at 5614 km, only the Great Wall of China is longer!

If you’d like to grasp the true beauty and origins of Australia, the outback is a fantastic educational destination! Contact our program specialists to start organising your Central Australia tour today.