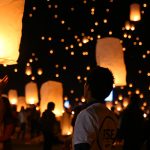 February 1st marks the first day of the Chinese New Year and the beginning of the Year of the Tiger. Also known as the Lunar New Year or the Spring Festival, Chinese New Year festivities last for 15 days and is a time for families to come together for cultural traditions, prepare for the good fortune to come, and, of course, great food. Here are seven things to know about Chinese New Year.

The traditional Chinese calendar is lunisolar

The festival’s roots are traced back to the Shang Dynasty

Chinese New Year has been traced back to the Shang Dynasty, between 1600 BC and 1100 BC. During this time period, sacrifices to gods and ancestors were made to mark the end of one year and the beginning of another. A wild beast, Nien, which means “year,” was believed to attack people at the end of the old year, so loud noises and bright lights were used to scare Nien away, a practice that evolved into today’s vibrant Chinese New Year celebrations.

The Chinese zodiac is divided into 12 years

While the Western zodiac system is divided into 12 months, the Chinese zodiac is divided into 12 years and each year is associated with an animal. It is believed people are influenced by the personality of the animal that rules their birth year. This year is the Year of the Tiger, the third animal in the cycle. The Tiger is known as the king of all beasts in China. The zodiac sign Tiger is a symbol of strength, exorcising evils, and braveness.

While all 15 days of Chinese New Year are reason to celebrate, the most important meal is the one that falls on New Year’s Eve. Families eat traditional foods like rice cakes, tangerines, fish, long noodles, and dumplings. Parents give their unmarried children red envelopes filled with money during the holiday as well. The colour red is a symbol of good luck and people decorate their homes with lanterns and paper scrolls, and often wear red clothes.

While Chinese New Year is rooted in religious tradition, many families focus on building good fortune for the year ahead. Some families may not do certain things, such as wear old clothing, to avoid carrying bad luck into the new year. Others may not wash laundry, handle knives, or take out the trash to ensure they don’t throw their good fortune away. Many families also believe it mandatory to stay up late to welcome in the new year.

It is a custom for adult children to travel home to be with their families for Chinese New Year, which leads to one of China’s busiest travel seasons. The Chinese government has instituted a week-long public holiday to celebrate the new year, allowing people the chance to return home to visit families.

Chinese New Year celebrations end with the Festival of Lanterns.

On the final night of Chinese New Year, people gather to light lanterns, watch fireworks, guess riddles written on lanterns, eat tanguyuan, enjoy lion and dragon dances, and even walk on stilts. Lighting lanterns is a way for people to pray for a smooth future and best wishes for their families. This year’s Festival of the Lanterns will take place February 15.

Planning is underway for international travel in 2023. If an international adventure is on the cards for your school, take a look at our china highlights tour or our Asia collection and get in contact with us today to start planning!