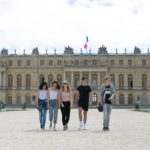 The benefits of second language acquisition

Learning a second language simply makes you smarter. A wealth of research has linked second language acquisition with a range of cognitive and social benefits. During a critical period of development, students are empowered to perform better at mentally demanding tasks, for longer periods of time.

Multitasking –Bilingualism requires the speaker to seamlessly switch between the rules and practices of two different language systems and this ability is transferable as improved multitasking (National Institutes of Health).

Perception – Not only will the learner acquire the lifelong ability to speak another language, but they’ll gain a new way of thinking and behaving. They’ll be better able to understand different points of view and empathise with others. Students may also be required to critically observe foreign environments, improving their ability to interpret relevant information and blocking out misleading information.

Linguistic ability – In learning another language, students develop the ability to notice discreet differences in speech, improving their active listening and general communication skills. They’ll learn to focus on the mechanics of grammar and vocabulary, critically analysing linguistic elements such as sentence structure and pronunciation (University of Melbourne).

Memory – The exercise of having to memorise an entirely new system of rules, sounds and words is a tremendous test of memory that will enhance students’ ability to retain information in the future.

By immersing your students in the natural environment of the language they’re learning, they can learn contextually and build an authentic intercultural understanding. A language tour is the ultimate way to fast-track second language acquisition for your students.

Explore our all of our immersive language tours here.