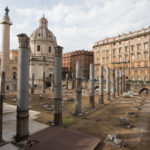 In a guided tour of Rome’s most famous ancient sites including the Colosseum, students will follow the footsteps of gladiators, who battled each other and wild animals for their freedom. They will then uncover pieces of the Roman Empire at the Arch of Constantine, Castel Sant’ Angelo and the Roman Forum.

Discover the history and inner workings of the smallest country in the world, the Vatican City. Students explore Michelangelo’s masterpieces and over 1000000 square feet of mosaics throughout the Vatican’s chapels. They’ll learn about biblical scenes and the significance of the many High Renaissance works of art.

Enjoy a guided tour of the Naples historic city centre, a UNESCO listed World Heritage site encompassing 27 centuries of history. Students will be amazed as they browse the world’s leading collection of ancient Roman artefacts at the Naples Archaeological Museum.

Explore the lost city of Pompeii, a civilisation that was buried under volcanic ash for 1,600 years, before being accidentally discovered. Students will gain extraordinarily detailed insights into what life was like in the city at the height of the Roman Empire, 79AD, as they investigate the Pompeii excavation site.

The Acropolis of Athens and its monuments are the single greatest architectural and artistic complex bequeathed by Ancient Greece to the world. Students will absorb the classical Greek thought and art, which is represented throughout Athens, they’ll then be able to make connections between these ideas and democracy, philosophy, theatre and freedom of expression and speech, which still serve as the foundation of the contemporary world.

Discover Olympia, the birthplace of the Olympic Games, which date back to 776 BC and have remained one of the most important cultural and sporting events up to this day. Students will explore ancient training arenas and stadiums and be astonished by stories of bloodshed and extraordinary athletic ability. With visits to temples dedicated to the Greek Gods, students are introduced to the stories and practices of ancient Greek mythology.

Enjoy a tour of the ancient ruins of Delphi and its excellent museum. The ancient site backed by imposing Mount Parnassus, is in one of the most beautiful natural settings in the country. Students will learn about ancient Greek gods and mythology as they’re guided along the Sacred Way, an ancient holy road through historical architecture between Athens to Eleusis.

Delving into the past of any civilisation through educational travel is an exciting and meaningful way to learn the stories and defining events of different cultures. By travelling to the sites where ancient history has unfolded, students are transported to the scenes they’ve learnt about in the classroom.

View the full itinerary of our Italy & Greece Ancient Classics Tour here, or explore even more of our history tours here.