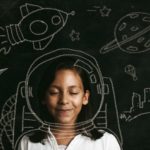 How many women can you name who appear in our history books? Unfortunately, off the top of your head, it’s probably just one or two! Here we celebrate and highlight the women who have paved their career in a male-dominated industry and are role models for young girls today – showing them that they can really pursue and succeed in a science career, especially today where opportunities in STEM for females are widely encouraged and needed!

Katherine Johnson – Mathematician
Graduating high school at the age of 14 and university at only 18, Katherine has an impressive list of accomplishments. Having studied every mathematics course on offer, Katherine became a research mathematician – a difficult field for African Americans and women to enter. In 1953 she took on a role at NASA and was essential in calculating the space flights trajectory to send astronauts to the moon. Katherine was so invaluable that some astronauts refused to fly their orbits around the earth unless the calculations of the computers were personally verified by her. During a time where women struggled to find their place in a male-dominated industry, Katherine’s story is inspiring and thought-provoking.

Margaret Hamilton – Software engineer
Margaret coined the term ‘software engineer’ and developed onboard software used in the Apollo program that allowed astronauts to successfully land on the moon! In 1969 when the Apollo missions were planes, writing code was programmed on large sheets of paper.

Mae Jemison – Astronaut
Dr. Mae Jemison was born in a town called Decatur near Huntsville, Alabama. She was not only an astronaut and the first woman of colour to travel to space, but also a physician, a peace corps volunteer, a teacher, and the president of two technology companies! Mae shared some inspiring words with students in 2009 that everyone can benefit from hearing:

“Never be limited by other people’s limited imaginations. If you adopt their attitudes, then the possibility won’t exist because you’ll have already shut it out. You can hear other people’s wisdom, but you’ve got to re-evaluate the world for yourself.”

Ritu Karidhal – Deputy Operations Director, Mars Orbiter Mission
In 1997 Ritu began working at the Indian Space Research Organisation as an aerospace engineer, where she played a key role in India’s successful launch to Mars – making India the 4th country in the world to reach Mars. Learn more about Mars and its mysterious past on the NASA website here!

Valentina Tereshkova – First woman in space
Valentia was born in 1937 to humble beginnings in a little town outside of Moscow. She left school at 16 to work at a textile factory while furthering her education at an industrial school and joined a club for parachutists, making over 150 jumps. In 1962 she joined the Soviet Space Center at Star City as a cosmonaut. Valentina spent an impressive 70 hours in space as she orbited the earth 48 times! As planned with all Vostok missions, Tereshkova ejected from the capsule during descent at about four miles above the Earth and made a parachute landing.

Lisa Kewley – Professor and Associate Director at the Research School for Astronomy & Astrophysics at the Australian National University
Lisa was born in 1973 in Canberra and raised in South Australia where her love for astronomy began in school. She graduated with a BSc (honours) in astrophysics at Adelaide University before moving to Canberra to pursue a doctorate in astrophysics at the Australian National University which she was awarded in 2002. Lisa studies galaxy formation and evolution and works on galaxy collisions, supermassive black holes, star formation and the amount of oxygen in galaxies across the cosmic tie. She now leads a network of 193 scientists and students around the world as Director of Astro 3D, aiming to unlock the mysteries of the Universe using innovative 3D technology. Read more about Astro 3D here.