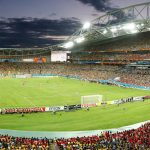 The host cities and stadiums were recently announced for the 2023 FIFA Women’s World Cup, as Australia and New Zealand look forward to welcoming the world’s best players and football fans in 2023!

The opening match will be played in Auckland and Sydney will host the final. With two years to go until the major event, the announcement is a big deal as states begin their preparations for the first-ever co-hosted FIFA Women’s World Cup.

The host cities include:

The FIFA Women’s World Cup is an international football competition and is held every 4 years. The inaugural Women’s World Cup was held in 1991 in China, sixty-one years after the men’s first FIFA World Cup. The event was won by the United States who are the only nation to win more than two championships and are the current world champs after winning the 2019 tournament in France. There is a three-year qualification phase for national teams to compete for 23 spots at the World Cup and the host nation will get the 24th spot. However, for the 2023 championship held in Australia and New Zealand, it will be expanding from 24 to 32 teams.

Our international soccer tours are coming soon! To be the first to know when we release them, visit our soccer tours page and register your interest.